Well it wasn’t supposed to come out, but the leak from San Diego Comic-Con made it impossible for Warner Bros. to keep the teaser under wraps any longer. The first official look at David Ayer’s Suicide Squad sees three minutes of footage showcasing all the biggest characters including Deadshot (Will Smith), Harley Quinn (Margot Robbie), Amanda Waller (Viola Davis), and of course… The Joker (Jared Leto)!

While many are still a bit unfamiliar with the concept of the Suicide Squad or what it might mean for DC’s expanding cinematic universe, it looks to be a fairly original approach at showcasing villains as the focal point of an arena dominated by super heroes. Look out for this one when it hits theaters August 5, 2016. 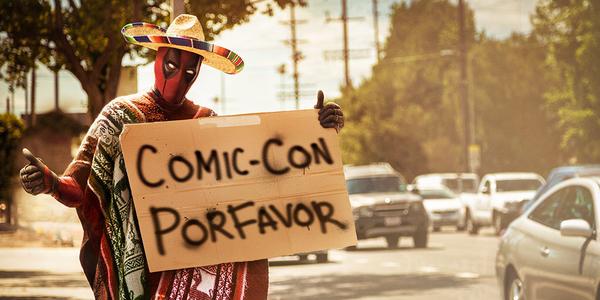 Many that follow the proceedings of San Diego Comic-Con this weekend are privy to the fact that it is a breeding ground for new content to be shown and for companies to give fans an exclusive look at what they’re working on for the present and future. One of the more anticipated appearances at Comic-Con this year was Fox Studios in hopes that their would be some footage to show for their upcoming Deadpool movie. Accompanied by this promo photo (shown above) was an amazing trailer that was adored by the fans there. It was met with such a positive reaction that the crew went so far as to give an encore showing to the fans after the initial premiere.

As great as the trailer may have been, Fox studios plans on making changes to the trailer before it makes an official public release. Apparently the VFX weren’t completely finished and they want to clean up some of the effects. Ryan Reynolds tweeted about the trailer and having something for the fans ready in about three weeks time. Hopefully, we can check back in a few weeks and see what was so amazing it had to be shown twice. I’m willing to bet that it’ll be worth it.

It seems like Toho and Funimation think that the best way to get some exposure for the upcoming Attack on Titan live-action film is to premiere it in North America. More than a month ahead of its intended release date.

Now no one should be too excited as the early release is only promotional. July 14th is the date and will be shown at the Egyptian Theater in Los Angeles (the same theater that premiered Dragonball Z Resurrection ‘F’). The fall season will see the part one and two come to North, Central, and South America (in select theaters) so there is no reason to feel too bad about the actual wait.

The early premiere in North does serve as promotional endeavor as it comes right after San Diego Comic-Con where FUNimation will be with Attack On Titan director Shinji Higuchi. CEO and President of FUNimation Entertainment Gen Fukunaga, in relation to Comic-Con, said that  “FUNimation is honored to host the world premiere of Attack On Titan here in the United States with Toho.” He also says that “Attack On Titan is truly a worldwide phenomenon and we are excited to bring the live action movie to theaters across the Americas later this fall.”