Fellow fans and followers of Capcom’s Resident Evil series were treated to a world premiere of what’s to come. This past Thursday, Capcom showcased their next addition to the franchise with Resident Evil Village. Here’s a quick rundown of what was announced and shown.

Village takes place a few years after Resident Evil 7: Biohazard. Players take control of Ethan Winters, the protagonist from the last game, as he is once again diving into a world of horror after meeting with Chris Redfield. Ethan will once again face many challenges and frightening new foes along the way as he searches for answers.

Players will be able to take themselves to a castle run by Lady Dimitrescu, a vampire who apparently is in charge of stopping Ethan in his tracks, with her daughters and other hordes of foes. Capcom was also showing off other characters such as “the Duke”, a merchant who is willing to sell the player various weapons, upgrades, and other items to help them on their journey. Players will also meet one more character who currently remains as a mystery.

Capcom dropped details on the various editions of the game they have to offer. The Collector’s Edition of Resident Evil Village will give players a bunch of both collectibles and in game items such as a Chris Redfield statue, poster, artbook, and a SteelBook Case.

Are you one of the lucky ones who were able to obtain a PlayStation 5? Well you’re in luck as Capcom released the Resident Evil 5 Demo in the PlayStation Store called Maiden. Players have a chance to take a sneak peak into Lady Dimitrescu’s castle and escape. For all of you who don’t have a PlayStation 5, don’t worry as Capcom is soon going to release another demo later this spring.

Resident Evil Village hits the shelves for the PlayStation 5, PlayStation 4, Xbox Series Console, Xbox One, and PC (via Steam) on May 7, 2021. Players who purchase the PlayStation 4 or Xbox One copies will get a chance to upgrade to the next gen consoles at no extra cost.

I need to start this review with a warning, this game is meant to be addictive and does have gambling elements to it. If you are aware of being susceptible to any form of gambling or have issues spending money in-game to the point it impacts your everyday life; then please turn away now. I am not putting this here as a slight against Puzzle Fighter alone, but this cash grab model that is in most of the mobile games out there. I would feel disingenuous without giving attention to this aspect of the game.

Puzzle Fighter from Capcom, has been one of the bigger puzzle games in history. Nothing too special about it, it is a Tetris-style game with exploding gems instead of pre-shaped blocks, break the blocks down to attack your opp 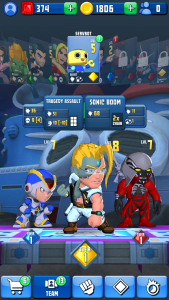 onent and first one to cause their opponent to overstack wins. This game gained fandom by featuring Pocket Fighter renditions of Street Fighter and Dark Stalkers characters as playable avatars just clicked.

The game has been re-released and has had some slight tweaks to gameplay since its original PlayStation release. Some of them consist of it includes being available for download on the Playstation Store (PS3) and Xbox Marketplace (360). However, the mobile release now features 3D character models and a roster expanding with more Capcom characters such as Viewtiful Joe, Dante, Nash, and Phoenix Wright.

With it being a mobile game you obviously can’t have matches going on too long, and I think that this aspect of the game is pretty interesting. With the inclusion of health bars you need to cause enough damage through breaking chains of gems, as well as combine larger gems to accumulate enough damage to defeat your opponent. Also, destroying enough gems will build

your special bar which will allow you to perform a single press Super Attack that deals direct damage to your opponent. And to keep your opponents guessing, the moves your avatar performs can be changed out to perform more damage or cause status changes to make the matches a bit more strategic and dynamic. To top all of that off, you play with a team of 3 and their affinities and assists will help to add wrinkles to your gameplay style.

Gameplay isn’t flawless though. A level up system has been added, along with a card collecting aspect to level up your avatars and their moves. However, unlocking characters seems to be done so by pure luck. To add to that, you have to rank up to gain access for the chance to unlock a new character at random. All of these aspects are built in as a clear attempt to make the game pay to play. Annnnd, it kinda does?

There is a level of excitement to be had in getting something at random. It makes getting the thing you want feel more significant than if you could just purchase it (hopefully with in game currency), but the game has so many randomized elements it

grows tiring really quickly. You see, part of the appeal of this franchise is playing as your favorite character and playing with your skill to compete or just play a quick mindless game. When the player has to worry about leveling up their character constantly to stay relevant or have to use characters they do not want to in the hopes of unlocking MegaMan X through ranking up it lessens the experience. Winning enough boats and chests, or paying for an in game loot-box(chest) that will guarantee a character and some random cards and in game coins doesn’t seem very exciting either. To add frustration to anxiety, in order to upgrade a character; not only must an increasing amount of cards be collected to keep level up a character’s moveset, an in game currency is required to upgrade those moves. The standard pay out of these items is definitely tipped to make you either grind to unlock what you want, or cave and pay to be the best.

Really there is just too much randomized chance in this game and not enough player choice. If you have a friend or look online for people t

o post their ID Names to add them, you can choose to play with someone from your friend list if they are online as well, but the search option isn’t a search option. You’d need to know the exact ID to add someone and cannot search for active players. The Rank up matches would be your only access to other players online. And since winning those matches comes with prizes, that would most likely be the best option for a quick player vs player match.

To be completely fair, there are some milestone chests that can be unlocked through doing daily missions, playing the mission matches, and playing lots of PvP ranked games. Season and Mid-Season chests given to every player to which the contents vary depending on the player’s rank which break up the monotony. And there’s also a fair amount of drops for every kind of item in the game that makes it feel a bit fair. The high spikes in costs for items however, (you’ll start hitting them around level 6 for most characters) quickly unbalances the game with level caps at 15.

The gameplay itself stays true to the series. Customizable characters, an expanded roster help a lot. And the addition of supers as well as a health based win system feels different in a good way. However, it’s slowed down by the money grab being done by Capcom with the game’s grind/pay to play nature. I still enjoy having a game or two if it’s just for a couple of minutes and if I am worried about my connection, I can do a mission for a for sure quick uninterrupted game. On a side note, I’d recommend this on tablet over the phone, as interruptions can ruin some PvP matches.

For those who do not like the changes, there are occasional classic style events where you can win up to 12 matches, but if you lose more than 3 you are out. I really like the set up of these tournaments, and while every player has their character set to max level to even the playing field, you are still limited to characters and moves you have already unlocked. But it is an event so it is not always available.

The game itself is good for a quick match every now and then. I turn off the notifications and just play it when I have an itch. If you have friends that are into this game it’ll be fun to play with them from time to time, and the gameplay is enjoyable, just some of the mechanics are broken purely for greed.

Honestly, I think this game shouldn’t be free. I would have been willing to pay mabey $3-$5(?) for a complete offline mode of this game to really enjoy quick matches on the go with optional online features. I’d also either remove the level up system or make it less of a hassle to do. I wouldn’t even have everything unlocked right away either.

Bring back in-game unlockables. I mean, there’s no better feeling than pulling off a combo, or beating a certain opponent, or completing a character’s arcade mode run. Then there’s the added bonus of getting a reward in the form of a new character or a secret special move. Unlocakbles don’t need to be insane to achieve, and I’m sure there would be people to double their payment to unlock everything. But honestly, both those ideas beat the all to common loot box scheme going on everywhere else.

Pay to win
Limited Player Choice at first
Hard to make friends in-game
3D models (This is my preference, but the 2D models from previous entries are superior)

Sharing the stage with big names like Ryu, Ken, M. Bison, Sagat, and Chun-Li in one of the biggest fighting games of all time seems like a daunting task for any newcomer. The new kid on the block certainly looks primed and ready to make his presence known in a hurry.

Necalli (shown above) is the first brand new character for the upcoming and highly anticipated Street Fighter V game. Not a whole lot to learn about the character yet but his trailer should suffice till more is revealed about the latest introduction into the Street Fighter franchise.

That’s not all the news as Capcom has confirmed that the DLC for Street Figher V will be… wait for it… FREE!!!

At the Capcom panel at EVO 2015, the developers made it a point to mention that all things concerning updates and downloadable content will see major changes. Playstation blog is reporting that players will be able to earn upgrades that would typically see some sort of cost through gameplay alone.

Now, if you just can’t wait and have to have all the new content as soon as possible you can still pay for it, but now Capcom has introduced two types of currency into the fold. Fight money will be pretty standard as it’s the currency you earn as you play through the game, but now Zenny will be a premium sort of currency that will function as real money to pay for content released after the game’s launch. System adjustments will be free from the start.

Street Fighter V is scheduled for release for PlayStation 4 and Windows PC in March 2016.