Lots of news here as we finally get confirmation on all fronts from The Coalition regarding all things Gears of War.

Lets start with the news that Gears of War is officially getting it’s remastering on Xbox One. Going under the name, Gears of War Ultimate Edition, the remastered version will indeed be formatted to 1080p resolution and run at 60 fps. The best part of this news is… the beta is available TODAY!

Now for the official gameplay reveal of what is being called Gears 4 (at the moment). This time around we see two entirely new characters in JD (shown above) and another female unnamed gear. It is night-time and they appear to be traversing through some sort of abandoned and broken down town. They only have their flashlights for to see with, but the danger is easily visible when a destructive storm hits and with nothing but a battered mansion available for shelter, they make their way through lightning strikes, falling debris, and a crumbling path into the mansion.

Scoping out the mansion initially doesn’t prove fruitful as all that is seen are glowing cocoons. Things really get tense when the female gear 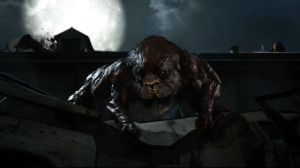 sees a figure flash across an open pathway. They pursue the figure until they reach a courtyard and the figure is revealed to be some sort of scorpion-like hybrid of another animal (right). We get to see the classic gnasher shotgun and lancer assault rifle in action as the gears fend off what turns into a pack of the monsters. There’s also a look at some new attack moves before the video ends with JD pinned down by on of the monsters.

The gameplay video was more than enough to excite the fans and with the beta for Gears of War Ultimate Edition, we should see a new revival of one of Microsoft’s most recognizable franchises. No official release date for Gears 4 yet, but it was revealed that the game will be targeting a 2016 Holiday timeframe.