Fans of EA’s Mirror’s Edge were teased by the franchise’s return at E3 2013 and have been patiently waiting for something resembling news of a release date. Well, earnings reports from EA for 2015 list the much awaited sequel as a launch title for the fourth quarter of their fiscal year. 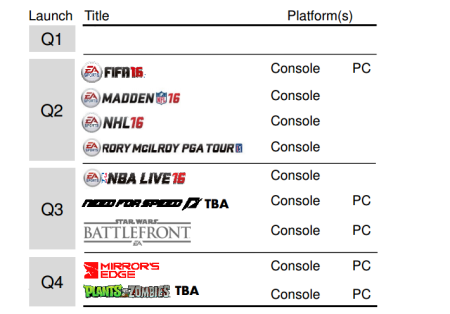 Now, Q4 for EA starts on the first of January and ends on March 31. So at this moment, everyone should expect a release somewhere in there. It doesn’t hurt that the studio DICE is overseeing the project and speaks about the game claiming it’s visually “elegant” and “minimalistic”. It’s great to hear because these are all properties that served the first game so well. Expect some new looks at the sequel when EA comes to E3 2015 starting on June 16 2015.