With Pokemon: Omega Ruby and Alpha Sapphire out for just two months, everyone at this point probably either completed their Pokedex, collected all eight badges, beaten the elite four and completed all episodes. Now, you’re probably catching them all again, both original and shiny versions right? Well let’s make things interesting for you.

Tonight, we were informed of a weird global distribution glitch/event of getting Pokemon #497, Serperior, the final evolve form of the starter Pokemon, Snivy. At first we were skeptical of this information, but when we tried it out ourselves… 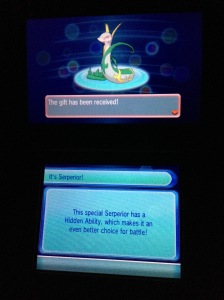 IT WORKS! You can get Serperior by heading over towards “Mystery Gift” at the main menu, clicking on “Get Gift VIA Code”, and entering the code “Pokemon497” (letters will all be in caps, so enter it normally.). It may take a couple of tries, but sooner or later, you will get Serperior!

We found out that the basic Serperior you get is level 50, and its move set comes with Leaf Storm, Hold Back, Wring Out, and Giga Drain. The set may seem common to some people, however its hidden ability, “Contrary” (Changes stat effects in a battle) makes this Pokemon more special. Plus, you can breed this Pokemon at a Day Care.

We will continue to inform you of this event and update with any changes, stay tuned!

Grayson M. is the Editor-in-Chief of Teh Lunchbox Publications and he really, REALLY…loves cheese. Follow him on Twitter, @TehR3M1X