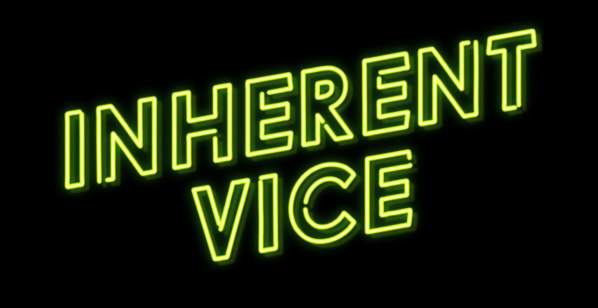 So I’ve never been a stoner. Never even tried the stuff and never wanted to. So before I went into this movie I tried to figure out if it would help to be high before I watch the movie; y’know just to see if I would enjoy the movie more. Not that it mattered because I was never gonna do it. It’s just that there are movies out there made specifically to get high to and watch. In the end, what I saw was a movie that confused the hell out of me and would have made anyone that would have been high an absolute mess of a person when they left. But before I digress let’s get to the movie.

Inherent Vice is a movie that takes place in the early 1970’s and centers around a stoner of a private investigator in Doc Sportello (Joaquin Phoenix) who has to solve a case that was kind of given to him by his ex-girlfriend Shasta (Katherine Waterson) to save her billionaire boyfriend from his wife and boyfriend from putting him in a “special” home. Things get pretty intense quick as things aren’t exactly making sense and Doc has to dig a little deeper to see what is really going on.

I couldn’t really get a good grasp on the movie because the plot was about as jumbled as Doc’s brain was through most of the movie. To be fair it really did start out trying to save the girls boyfriend… but then it was about getting another guy back to his family… but then it was about finding the ex-girlfriend who went missing at one point. The movie didn’t drag because it never focused on one aspect of the plot long enough to (don’t really know if that’s a good thing or not yet). Not to mention the ending while pretty definitive was still a bit confusing. You have to be pretty sharp to see where it is all going and you really have to be a fan of those types of movies to appreciate the format it went with. I can’t say I was exactly a fan myself but it was an unfamiliar situation to be placed in and was interesting to say the least. 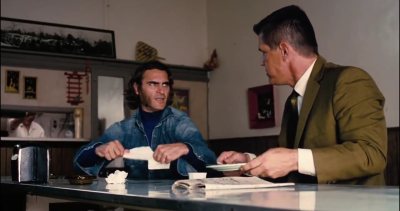 uin Phoenix as Doc. He was a hippy in every sense of the word without glorifying it or becoming a caricature of the image in the way that other movies seem to do. He was level-headed, but always functioned with a sense of urgency and played up the intelligence of his character very well. He also did sooo many drugs in the movie. You almost wonder how he did anything at all. Between his and Josh Brolin’s character Lieutenant “Bigfoot” Bjornsen, there was consistent dialogue both humorous and not so humorous. In fact much of the movie was unexpectedly funny. They really made it feel like this noir style of movie and that in and of itself is a plus as well. I even enjoyed Owen Wilson’s as Coy Harlingen and I thought I would never say that about any role he plays.

This scene provided a much needed contrast in setting to the movie and thought it was well received.

What surprised me the most about the movie was just the ambiance of the movie. The filters used to shoot the movie were of a slightly grainy texture that makes the movie look more rigid; like it was shot in the 70’s. The look and the setting were all a joy to see and added to the noir style experience of the movie. I love to see movies go the extra mile like that because it provides more authenticity and validity than any gimmick like 3D does. I mean seriously, I saw movies like American Hustle and Wolf of Wall-street (both good movies, especially the latter) and outside of the clothing didn’t feel like they were in the time-frame they said to be set in.

Final Verdict: I can’t say the movie was bad just like I can’t say the movie was the Oscar contender it was praised as. I really wanted to like the movie, but It really just felt like a glorified indie film if nothing else. Now that’s not a bad thing but with so many quality actors being apart of the film you would have thought it would have a bigger feel and showcase that strength of star power going in. It did not do that for me but what it did do was provide me with an experience I had not had before. In the end there were more things I liked than didn’t. It’s just that what I didn’t like were what I felt was more crucial to the films quality. The movie is based on a book which apparently has the writing style the movie plays off of so I guess it wasn’t the movie taking liberties as much as it was actually staying true to the author and their work. For that I have much respect. The movie is probably better on a second or third showing so you can really sink your teeth into the plot. Maybe it’s an interesting new marketing strategy to give a movie a limited release and get them to see it more than once. If it works then it works but for this movie specifically it’s not for me. But check it out if you happen to find a theater that is showing it and maybe you’ll receive it a bit differently than I did.

+ Style and overall production of the movie was top-notch

+ Most, if not, all the characters were enjoyable

+ It was actually pretty funny for what it was worth

– Needed a better finish to the film