HOW IS THE AUTUMN WEATHER TREATIN’ YA, LADIES AND GENTLEMEN, CHILDREN OF ALL AGES!?!?…This is your man Remy Tyndle over here, and I’ve got a question for ya’ll!  How many of you Lunchboxes are familiar with the “Shantae” video game franchise?

Shantae, the main character and hero of her self-titled video game, first released in 2002 for Game Boy Color.

I was just scrolling through the 3DS Nintendo E-shop, when I stumbled upon the most recent installment, “Shantae and the Pirate’s Curse” (Third game in the series).

Developed by WayForward Technologies, Shantae is an Action Adventure Platform handheld game that centers around–you guessed it, Shantae, a half-genie cutie pie of a hero who protects her home town from a band of pirates, led by her nemesis, Risky Boots.  Risky Boots claims herself as Queen of the seas, as she controls her army of Heartliss–*cough* “Tinkerbats”!  Shantae whips her hair back and forth to combat the bad guys and stop Risky Boots from using a stolen Steam Engine for her evil plot.

One of Risky Boots’ army of shadows, a Tinkerbat.

I found “Shantae” by accident and got curious, because you all know how I feel about Pirates.  Upon further research, I find that the self-titled first game had been released to the masses back in 2002 through Capcom on the Game Boy Color.  With that being the period when the Game Boy Advance was newly released, Shantae’s debut was…not what you would consider anticipated, but still it turned out to be a hit!  Now with its third game recently released on Oct. 23, 2014 for 3DS, I’M A FAN AND I HAVEN’T EVEN PLAYED IT YET!!!  Therefore, YOU WILL see me do a review of “Shantae and the Pirate’s Curse“.  Also, a FOURTH title has been confirmed and is now in development, and it will be known as “Shantae: Half Genie Hero” 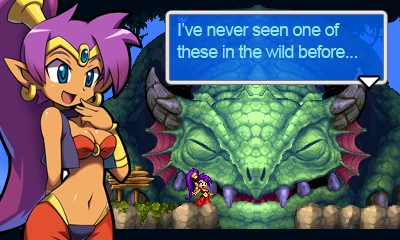 A screenshot from “Shantae and the Pirate’s Curse”, from wayforward.com

Shantae, sporting a pirate look in “Shantae and the Pirate’s Curse”. (Sorry, I can’t stop posting pictures of her; she’s just so cute <3<3)