The second season of Free! ended with the summer season of anime. Not only do we get a few new characters but we also get to go deeper into our main five. For an anime that started out as a commercial for an animation studio, it has turned into something extraordinary and memorable. Even better than the obvious fan service, is the actual story and character development underneath it all.

The last time we saw Haru, Makoto, Nagisa, Rei, and Rin, they had settled their differences over a relay race at the regional preliminaries but were disqualified. This season takes a look at how Rin has changed, the forming of his own team at Samezuka Academy and how the Iwatobi boys handle the coming graduation of their third years. The Iwatobi Swim Club is still looking to recruit new members. Meanwhile, the boys are training to make it all the way to nationals. 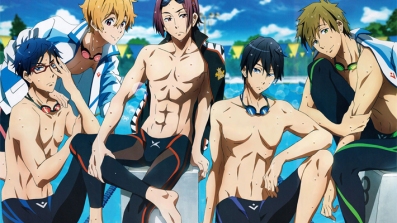 Another look at the season two cast

Two new boys are introduced to fill in Rin’s side of the story. Sousuke, his childhood friend, comes to Samezuka and stirs things up with Haru while facing his own demons. The former swim team captain’s younger brother comes in as a freshman. Ai, from the first season, has a stronger presence and a better relationship with Rin. There is a healthy rivalry between the two the teams that leads them to inspire each other.

The boys’ struggle to find their dreams and make their way out of adolescence and into adulthood is just as important as swimming itself. There is fun, life, laughs, and tears this season.

Verdict: Free! Eternal Summer still maintains that beautiful Kyoto Animation quality and the music continues to be catchy. Even with all of the fanservice, there is still good stories held up by a developing cast of characters. It gets a 4.5 out of 5 from me so go check it out.